HomeFAQExchangeWhat is price impact vs. price slippage in DeFi?
Exchange

What is price impact vs. price slippage in DeFi?

What is Price Impact?

The influence of a user’s individual trade over the market price of an underlying asset pair is known as price impact. It is proportional to the quantity of liquidity available in the pool / Automated Market Maker (AMM). For illiquid markets/pairs, the price impact can be very substantial, and a trader may lose a significant portion of their assets.

What is the difference between Price Impact and Price Slippage?

Although price impact and price slippage are extremely similar, there is a distinction.

Slippage, like price impact, is strongly dependent on a pool’s liquidity. Smaller collective market movements are required to generate large changes in the pool’s rate if the token pair has little liquidity.

Slippage might also be beneficial. An excess quantity of tokens is returned for the swap if the rate moves in a favorable way.

How to minimize negative price impact

By design, forbitspace Spaceflight algorithm smart order routing will automatically split a single transaction into multiple orders across various DEXs, allow traders to tap deep liquidity and receive the best price with the lowest slippage and the most efficient liquidity.

To manually reduce the price impact of a swap, you can decrease the amount exchanged or wait for more liquidity to join the market. This liquidity will never appear for many “less reputable projects” or scam tokens. It’s also a good idea to double-check that the number of tokens listed in the “You Receive” section corresponds to the current market rate.

How to control slippage

forbitspace provides a great solution for dealing with slippage. Users can select a desired percentage of allowable slippage for their trade using the “Slippage tolerance” feature.

This feature may be found under the swap Advanced settings. 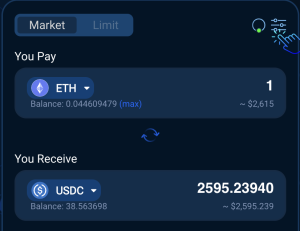 The transactions will fail if the returned token amount exceeds the allocated slippage tolerance between the time of submission and the time of confirmation. While unsuccessful transactions do cost gas fees, they also prevent further funds loss due to slippage.

What happens if I set the slippage tolerance too high or too low for a transaction?

If the slippage tolerance is set too low, the transaction will fail (revert) if the price goes beyond the given percent. While a low tolerance might help prevent front running, it can also result in gas costs being lost due to a failed transaction.

Did this answer your question?